U.S. credit card debt hit $870 billion — the largest amount ever — as of December 2018, according to the data from the Federal Reserve. Credit card balances rose by $26 billion from the prior quarter.

Nearly 480 million credit cards are now in circulation — up by more than 100 million since hitting bottom after the recession a decade ago.

At the end of last year, credit cards were the fourth-largest portion of consumer debt in the U.S. after mortgage, student loan and auto debt. But the quarterly increase in credit card debt was faster than the other categories. Overall debt reached a record $13.5 trillion. In aggregate, credit card limits rose for the 24th consecutive quarter, with a 1.5% increase in the fourth quarter of 2018. 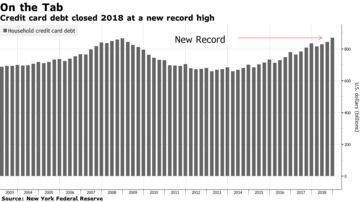