Morgan Stanley’s Mike Wilson acknowledges he made the wrong call on the U.S. equity market this year. But that hasn’t dissuaded him from holding onto one of Wall Street’s most bearish forecasts.

With the S&P 500 Index at a record high after surging 17 percent this year, the firm’s chief U.S. equity strategist issued a mea culpa Monday, saying he underestimated a rally that’s been driven in large part by the Federal Reserve’s dovish tilt. Rather than revisiting the 2018 trough, as Wilson had predicted in January, stocks have kept marching higher.

It’s the second time in seven months that Wilson has owned up to an overly pessimistic prediction. Last September, he said his early call for a correction amounted to the same thing as not being right. A few weeks later, stocks began a sell-off that ultimately took the S&P 500 to the brink of a bear market. 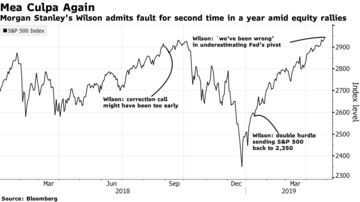 Still, Wilson is sticking by his longer-term outlook for the market. Even though this year’s rebound has pushed the S&P 500 about 7 percent above his year-end target of 2,750, fundamentals just don’t support the market’s current levels, according to his analysis.

“We have to acknowledge our error and decide if the market is telling us something and if we should raise our targets,” Wilson wrote. “The short answer is no because valuations are full and we still see downside risk to the consensus earnings estimates over the next 12 months.”

At 17 times forecast earnings, the S&P 500 is trading at a multiple that’s 14 percent higher than its 10-year average, data compiled by Bloomberg show. While first-quarter earnings have come in better than expected, analysts have continued to lower estimates for coming quarters. The expected rate of growth for the current quarter just turned negative.

While the size of predicted declines is small, any deterioration would raise the odds for an earnings recession, a scenario that Wilson predicts for this year. Despite the unfavorable profit backdrop, speculation that the Federal Reserve would lower interest rates and optimism that a China-U.S. trade agreement will be reached have continued to lift the market.

The S&P 500 could rise to 3,000, about 2 percent above its current level, on the announcement of a trade deal, but that should be seen as a sell signal, according to the strategist. Despite growing talk about a market melt-up, investors shouldn’t chase the rally, he said.

Morgan Stanley defines a market melt-up as a period when the S&P 500’s price-to-earnings ratio moves to high levels versus its recent past very quickly. The firm identified six instances over the past three decades that fit the criteria and found they shared something in common: they’re either accompanied by monetary or fiscal stimulus.

While the Fed has tilted more market friendly, Wilson suggested the current environment lacks other elements that would embolden a melt-up, such as a weaker dollar, better growth outlook and a potential uptick in consumer confidence. In particular, companies such as Amazon.com Inc. and Facebook Inc. have cut capital spending while small-caps and cyclical shares have trailed the market, all evidence pointing to subdued growth prospects.

“The positive spin is that maybe last week’s spike is like the spike in early January 2018 and we still have another spike to look forward to as people decide they have to pile in,” Wilson wrote. “Use at your own peril, but our advice is to not bet on it at this stage because the fundamental conditions are different from past periods that exhibited such exuberance.”